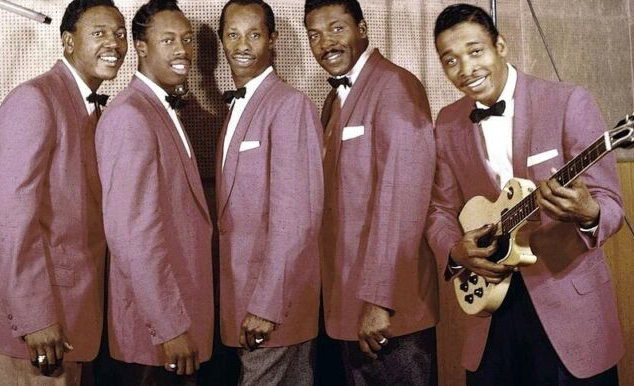 The “5” Royales, led by vocalist/guitarist/songwriter Lowman Pauling (right), fused gospel, blues and R&B in a way that influenced many of the soul artists to come.

Forming as the gospel group the Royal Sons Quintet in Winston-Salem in the early 1940s, the “5” Royales would pioneer an early mix of R&B, doo-wop and guitar-driven blues that would serve as a foundation for the soul music of the 1960s, as well as an inspiration for later rock musicians such as Creedence Clearwater Revival’s John Fogerty. Their songs, most written or co-written by vocalist/guitarist Lowman Pauling, would become hits for artists as diverse as James Brown and the Mamas and the Papas even as the Royales found their career hampered by assorted lawsuits.

Founded by guitarist Pauling and his brothers Clarence and Curtis, by 1950 the group’s line-up had settled around Lowman Pauling and vocalists Obadiah Carter, Johnny Tanner, Jimmy Moore and Otto Jefferies. In 1952 the Royales signed to Apollo Records and skeptically switched to performing secular music, becoming the “5” Royales in the process. Their doubts about changing directions were presumably mollified when “Baby Don’t Do It’’ and “Help Me Somebody” topped the national R&B charts the following year.

In the wake of this success, however, came trouble in the form of a lawsuit from King Records artists the Royales, who were Hank Ballard’s backing group. As the result of this legal action, Ballard’s Royales became the more famous Midnighters, while Pauling and company laid claim to the “5” Royales moniker.

By 1954 the “5” Royales themselves were signed to King Records, kicking off a period of creativity that would cover most of the late 1950s. The group had been augmented by the addition of tenor vocalist Eugene Tanner, but truly set them apart from contemporaries such as the Dominoes and the Drifters was Pauling’s guitar playing, heard on tracks such “The Slumper, The Slum.” His style, aggressive for the time and the genre, would influence Steve Cropper, house guitarist at legendary soul label Stax Records.

The group’s most lasting contributions to soul music, however, were two 1957 singles that failed to make the Top 40: The Lowman-penned “Dedicated to the One I Love,” later a hit for the Shirelles and the Mamas and the Papas, and “Think,” covered by James Brown in 1960. The latter led to a legal dispute between the group and Brown, resulting in the “5” Royales leaving King Records. They continued recording, but the early 1960s saw them rapidly overshadowed by many of the groups that they had influenced, and the Pauling-led lineup disbanded in 1965 with little fanfare.

Lowman Pauling died in 1973, at the relatively young age of 47. The “5” Royales would eventually be recognized as musical pioneers, however, receiving the NC Folk Heritage Award in 1992. In 2015 they were inducted into the Rock and Roll Hall of Fame in the “Early Influence” category, which doesn’t seem to quite do justice to the contributions that they made to the development of soul music.