Come to the Spirit of Giving Toy Drive on Dec. 12! 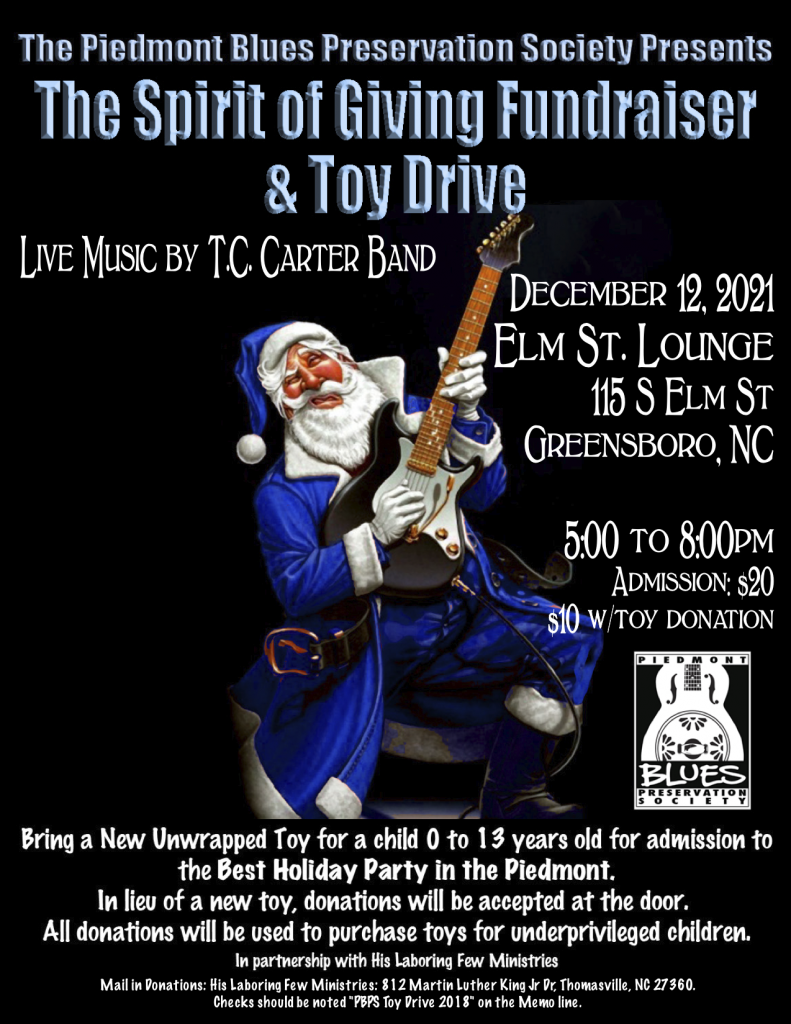 Join us in… The Spirit of Giving  for the PBPS Holiday Party A Blue Christmas toy drive, fundraiser, and capital campaign launch on December 12! Bring a new unwrapped toy for a child 0 to 13 years old for admission to the best holiday party in the Piedmont! In lieu of a new toy, donations […]

Ready for the PBPS Blues Challenge/Capital Campaign Launch Party on Nov. 14? If you are interested in competing in this years Blues Challenge please complete and submit this form https://forms.gle/Hr8oynaH3keaMbwe6

Penn Martin, PBPS Founder, Passes Away at 78 By Jim Carson Piedmont Blues Preservation Society co-founder Penn Martin passed away on July 2. His love of the blues and live music led him to partner with Bill Mitchell to launch PBPS in 1985. He is survived by this wife, Freddie, his children and grandchildren. Penn’s relationship […]

Picking on Downtown: Musicians gather on Elm Street for Old Time Jam Session. Guitarist Peter May hosted an interest meeting and jam session for blues and old time musicians on August 13 at Essential Hemp on Elm Street in downtown Greensboro. We hope that these Piedmont Pickers Conventions become a regular event, bringing together musicians […]

Beach Music: Making Waves in the Carolinas Exhibit Saturday, August 28, 2021,  11am – 2pm Piedmont Blues Preservation Society is proud to present a second FREE program via our new education initiative The Blues Equity Institute! Participants will meet at the NC History Museum in Raleigh at 11am where we will tour the exhibit Beach […]

Piedmont Pickers Interest Meeting/Friday Night Live Friday, August 13, 2021  5:30pm – 7:30pm As one of the only regions of the country with an original Blues genre, PBPS wants to celebrate and grow our legacy with some great feedback from YOU! Sign up so we can contact you about future events for our new Piedmont […]