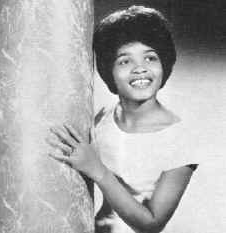 While many North Carolina soul artists, like last week’s Soul Twisters, remained in the Tarheel State, others decided to pursue their careers farther afield, taking their homegrown talent to larger cities with more connections to the national music industry. Such was the case with Eva Narcissus Boyd, better known to the world as “Little Eva.”

Born in Belhaven, North Carolina, in 1943, Boyd left NC for New York City in 1960, hoping to transplant her experience as a gospel singer in her hometown to what was then one of the most influential music scenes in the country. According to information compiled on the website Spectrapop, Boyd used family connections to land jobs as both a member of female vocal group the Cookies as well as a nanny for the Brill Building songwriting team of Carole King and Gerry Goffin. The latter relationship would lead Boyd – now christened “Little Eva” by her new record label, Dimension – to her biggest success after she recorded a demo of the pair’s “The Locomotion,” a song that capitalized on the era’s craze for “dance records” such as Chubby Checker’s “The Twist” and Dee Sharp’s “Mashed Potato Time.”

Released with minimal production, “The Locomotion” reached number one on the charts, aided by Boyd’s TV appearances where she demonstrated the accompanying dance steps that she had devised. Pop stardom in the early 1960s was transient and ephemeral, however, and Boyd struggled to maintain career momentum, her releases alternating between questionable attempts to cash in on the fading dance record craze, such as “The Turkey Trot” and the absurd “Old Smokey Locomotion”, and great-but-largely overlooked 45s such as “Keep Your Hands Off My Baby,” “The Trouble With Boys,” “Let’s Start the Party Again” and her majestic cover of Ben E. King’s “Stand By Me.” All of these showed Boyd’s expanding vocal prowess, but even a switch to a new record label Verve failed to staunch the decline, despite great releases such as “Take a Step (In my Direction).”

In 1971 Boyd returned to North Carolina and settled in Winston-Salem, living a life of financial struggle and obscurity, despite “The Locomotion” being regularly revived in versions by Grand Funk Railroad and Kylie Minogue. The success of the latter was enough to coax Boyd out of retirement and return her to live performing, which she continued to do until her death in 2003. In 2014 Boyd was inducted into the N.C. Music Hall of Fame.

“There was nothing phony or insincere about Eva and her voice,” King told NPR’s “All Things Considered” in 2003.