Mike Carr Junior Blueser Award
Presented each year to one regional up and coming youth blues artist. The award recognizes emerging youth talent who are keeping the blues alive by their music and public displays of talent, and are the future of the blues. The presentation is named in honor of former board member, Mike Carr, who encouraged PBPS to reach out to young musicians in the Piedmont. 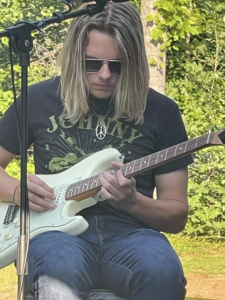 Michael Stahly is a 17 year old guitarist from Lawsonville, North Carolina with a passion for playing the blues. He recently represented Piedmont Blues Preservation Society in the 2022 International Blues Challenge in Memphis, TN. Michael took home 1st prize in the Youth Category at the Road to Memphis Blues Challenge held Greensboro, NC.

Michael began playing at the age of 11 and is inspired by legends such as Jimi Hendrix, Eddie Hazel, and BB Chung King. He first played for a crowd at the Brewer’s Kettle in Kernersville, NC in 2021 and quickly gained supporters. Michael’s goal is to continue to share his love for the blues through a successful career in the music industry. In November 2021, by Piedmont Blues Preservation Society. This qualifying event gave him the opportunity to participate in the International Blues Challenge which will took place in Memphis, TN from May 5 – 8, 2022. Michael showcase his talents for industry professionals and peers as bands from around the world competed for internationally recognized top honors.

The award is sponsored by Summerfield Family Chiropractic.

PBPS Keeping the Blues Alive (KBA) Lifetime Achievement Award:
Presented to an individual who has made a significant contribution to the blues culture through their work, volunteerism, or investment. 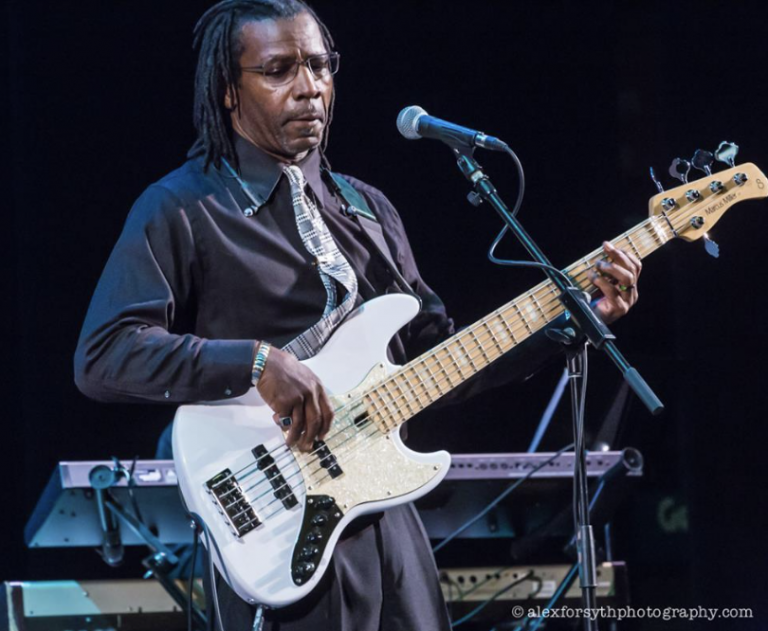 Arnet Jerome Diggs aka AJ Diggs was born in Philadelphia, Pa to a family of 10, where all of his brothers and sisters either sang or played an instrument. He inherited a love for all types of music (i.e. gospel, jazz, R&B) from his mother, who had the voice of an angel and his father who had played guitar and sang quartet gospel. AJ Diggs left Philly in 1988 and relocated to South Carolina, then moved to North Carolina in 2006. He is currently a single parent with 2 daughters, Yolanda & Maleka and a son Arnet Jr., who is mildly disabled, high functioning, and talented. The family recently mourned his brother Terrence who passed on April 6th, 2022.

As a music magnet student AJ Diggs was good enough on cello for 2nd seat “All City Orchestra” during high school and learned bass, guitar, drums, piano, theory, composition and acoustics. His influences grew beyond the Mozart he studied through the ‘60’s and ‘70’s Motown eras to electronic music from the ‘80’s & disco era. His brother Vincent, a percussionist and singer in a 70’s band called The Interpretations played with Grover Washington Jr and mentored Pieces Of A Dream. Influences including Jimi Hendrix, Motown’s James Jamerson, Earth, Wind & Fire, Isaac Hayes, Curtis Mayfield, Quincy Jones, Larry Graham, Stanley Clarke, Marcus Miller, Victor Wooten would lead AJ Diggs towards more a more virtuostic style of play. AJ is a veteran of the US Navy.

AJ maintains an interest in theme songs, movie scoring and arrangement and works as a music director often. Notable performances include national and international artists The Blue Notes, The Dreamlovers, The Ambassadors, Bill Pinkney and The Original Drifters, Johnny Rawls, Chick Willis, Barbara Carr and Priscilla Price. He values the mentorship and business acumen of blues legend, Greensboro resident and friend, Roy Roberts has made it possible tour overseas to perform at The Cognac Blues Festival in France, he was honored to meet guitar legend George Benson. Billboard Live in Tokyo where he amnd Roy backed William Bell is his favorite on stage memory. He is still in the Roy Roberts Band along with the Greensboro based bands, House Of Dues and Soul Central.

AJ Diggs current album, “Already In Progress” is found in the beach and blues markets and is available via CD Baby, Amazon , Spotify and other platforms. AJ and Company is his own band created in 1999 while residing in South Carolina and will play May 22nd, 2022 at Piedmont Blues Preservation Society in Blues and Foods Market in Center City Park.

Over a week of cultural presentations and events leading up to the 36th Annual Carolina Blues Festival. 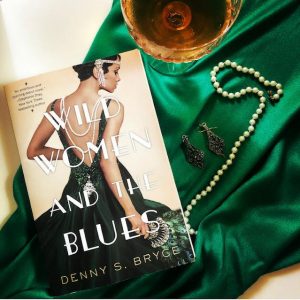 Producers from across NC remix Blues tracks in this Hip-Hop competition with highlights the Pop Music journey from Blues to Hip-Hop. Cash Prize will be awarded. Hosted by Lady C , Hip-Hop scholar, choreographer, and an administrator at Winston-Salem State University. Judges will be artists OC from NC & IllPo and producer and director, Skibo. DJ Ena Pop will be on the decks. 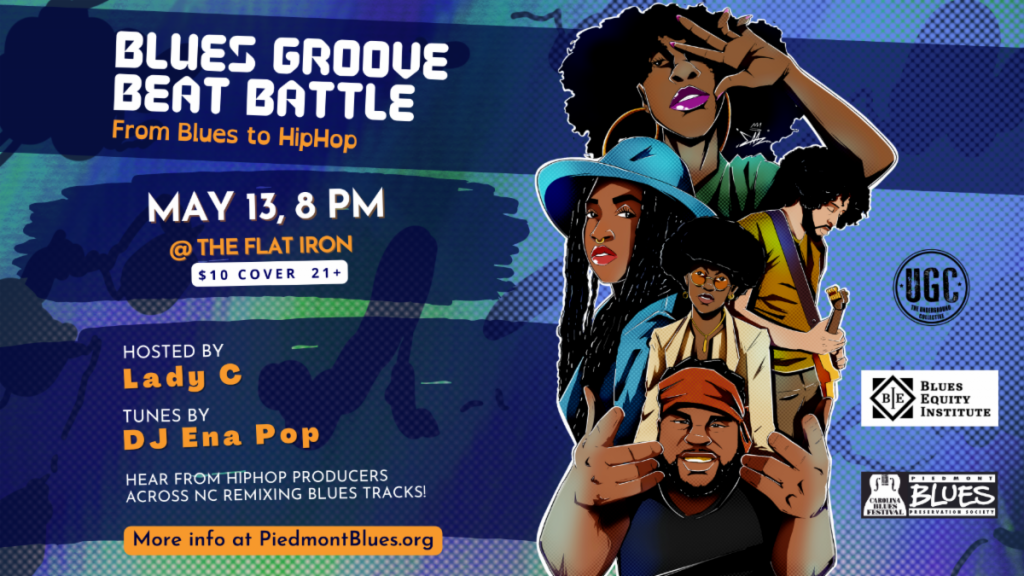 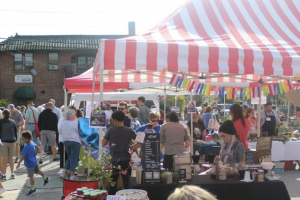 May 14th at 9am – Blues and Greens at the Corner Market

Join musician Colin Cutler for an acoustic set as he helps us launch NC Blues Week surrounded by local goods.

May 15th at 6pm- Young, Black, and Blues a Virtual Discussion

Inspired by an open letter written by Jontavious Willis, Marquise Knox, and Christone “Kingfish” Ingram this discussion amplifies the voices of the next generation of Blues players and patrons in a virtual conversations. Hosted by WKYU NPR host Lamont Jack Pearley of The African American Folklorist. 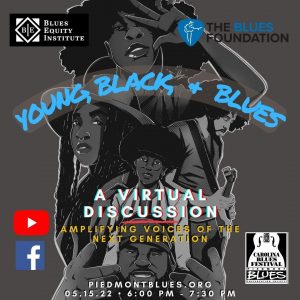 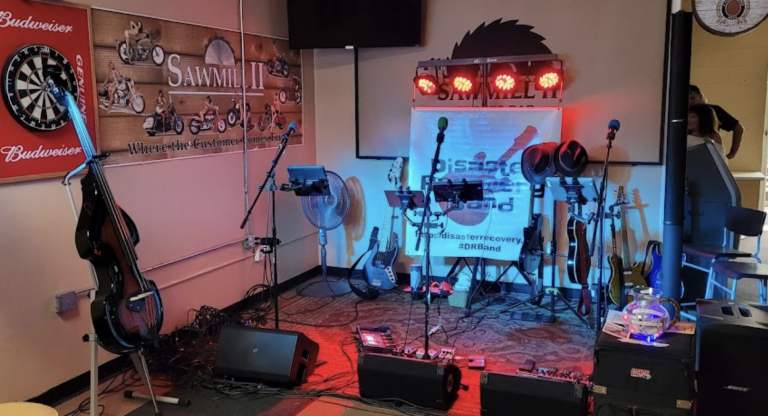 May 19th at 7pm Shiela’s Blues Jam at Sawmill II

Join PBPS Lifetime Award recipients Shiela Klinefelter for a Greensboro style Blues Jam. Bring an instrument if you want to play! 21+ and Open to the public.

May 20th at 8pm – Eric Gales at The Blind Tiger

It’s an album release tour and a festival Pre-Party! Have a great time dancing to Eric Gales new record “Crown”. 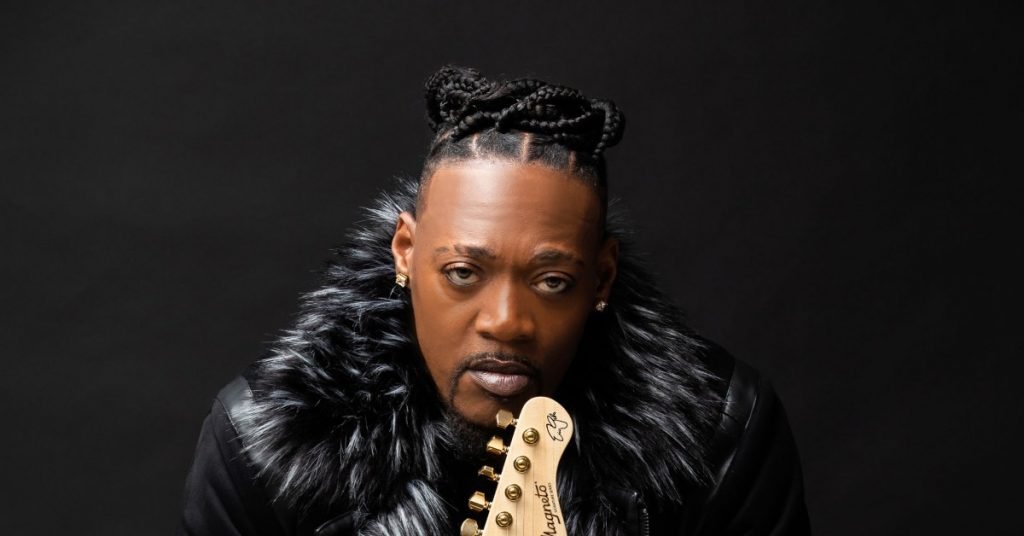 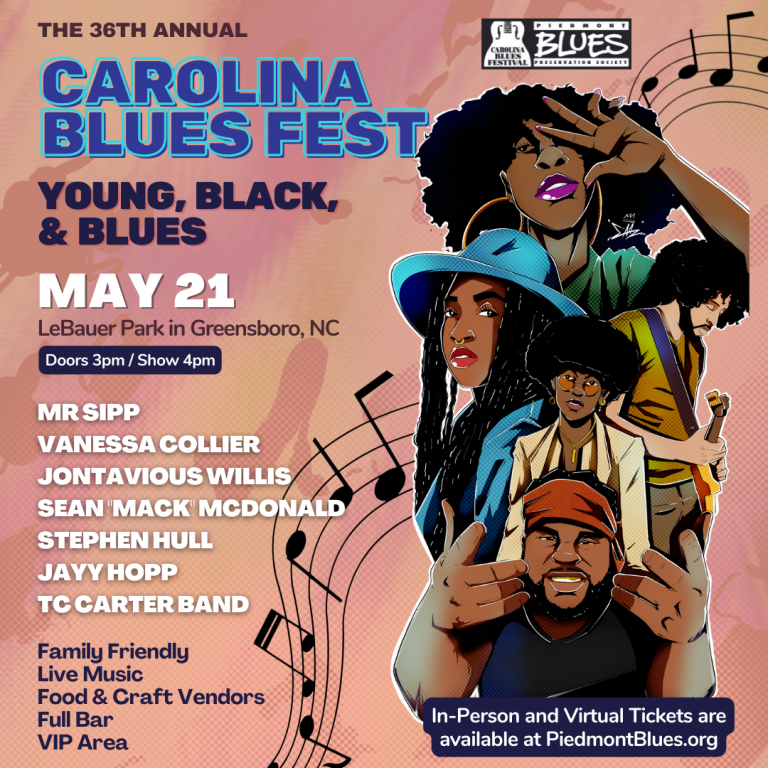 PBPS presents this annual cultural presentation of Blues music each year in Downtown Greesnboro, NC. This year’s theme amplifies the voices of young African American musicians & fans and celebrates depth and range of the contributions these community members contribute to the Blues in the past, present, and future.

May 21st –  Greensboro Bound Literary Festival: King of the Blues

Blues & Foods Market is a FREE music event with the mission of raising awareness for Equity in the Arts and Food!

Join us for a day of Blues, marketplace vendors, and food vendors in Center City Park! 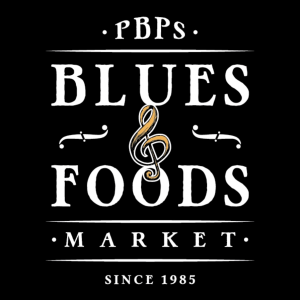