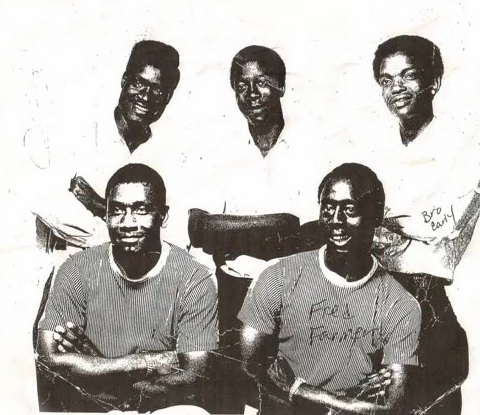 The Soul Twisters, with James Early and Fred Farmer on the right.

Way back in 1984, my mother, knowing of my burgeoning interest in obscure garage rock, saw a segment on a local “PM Magazine”-type show about a vinyl compilation of North Carolina bands assembled by collector Ken Friedman and ordered it for me. “Tobacco-A-Go-Go” leaned heavily on the psychedelia and power pop that were present in the NC music scene of the 1960s, but one song was unmistakably soul music: “Swinging (On a Grape Vine)” by the Soul Twisters, information about whom Friedman admitted was “not to be found,” other than their record label – Romat – and the year the song was recorded, 1967.

Well, thanks to the passage of 40 years and the wonders of the internet, a little bit more of the Soul Twisters’ story can be fleshed out. According to information on the blog Garagehangover, the group was composed of Johnny Daniels on lead vocals and guitar, Fred Farmer on lead and background vocals, Johnny Williams on drums, Joe Daniels on bass and James “Bro” Early on keyboards. The Greenville group released two singles on the Romat label; “Swinging (On a Grapevine)”/”Soul Fever” and “Doing Our Dance”/”If it Takes a Year.” Both were recorded at the studio of Roy Matthews, famous for producing the O’Kaysions’ beach music classic, “I’m a Girl Watcher.”

“Doing Our Dance” is standard dancefloor-packing fare for the era, while “Soul Fever” and “Swinging” show the influence of Booker T and the MGs. But “It Takes a Year” is a classic soul ballad in the Stax/Muscle Shoals tradition, with an earthier approach befitting its origin in the North Carolina coastal plain.

According to a comment left on the above blog by James Early himself, the group later morphed into The Chapter 3. Early eventually moved into gospel music and was still recording up until his death in 2016. The Soul Twisters, however, were a great example of how NC soul artists were putting their own twist – sorry, couldn’t resist – on the music that was coming out of other strongholds of southern soul in the late 1960s.